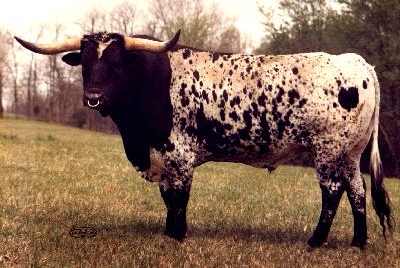 Reg.: T-4852
Brand: 13/8
DOB: 4/1/1978
Color:
Weight: 1860 Horns: 51.75
He was sired by Don Quintana, out of Ranger's Measles. He was born in 1978 & still commands the respect of the show ring, the auction ring & the embryo laboratory. His calves are still capable of winning under the toughest competition & often are beautiful black & white speckled, like Impressive. Many of the very expensive cows in the industry have been flushed for embryo transfer with Impressive due to his very correct type, perfectly straight back, very trim underline, 51" horn & a beautiful perfectly balanced body. He was the correct blend of Don Quixote with Texas Ranger & Measles breeding. Use him for correct "Measles" type - black speckled show calves. 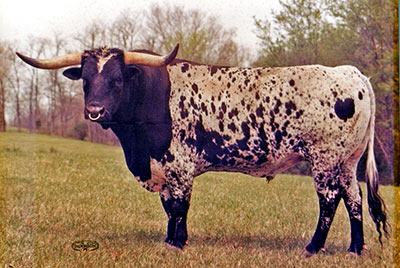 Impressive was born 4-1-78. Sire was Don Quintana by Don Quixote, out of Ranger's Measles by Texas Ranger and out of Measles. He was grand champion at the Colorado State Fair in 1979. Many thought Impressive was the most correct TL bull ever. He was very trim, straight backed and sired mostly black speckled calves. In 1980 Wick Comer of Hendersonville, TN bought him from DCCI for $62,000, the highest price ever paid at that time for a TL bull.

While in Tennessee Impressive was being hauled in an open trailer with deep straw. The Comer ranch cowboy flipped a cigaret in the trailer, it caught on fire, unknown by him for many miles, and Impressive was almost burned to death with his underparts, hair and hide burnt badly. With thousands of dollars of vet time he was later recovered enough to breed a few cows. His production was minimal. He was purchased by George Gilman of Houston and owned by him until his final days. He may be found in pedigrees of many great cattle including Field of Pearls, Cowboy Tuff Chex, Tempter, Clear Win, Drag Iron, Rodeo Max, Fifty-Fifty, and Over Kill. Impressive had a younger brother born named Emperor that DCCI sold to famous TL producer, Johnnie Hoffman.