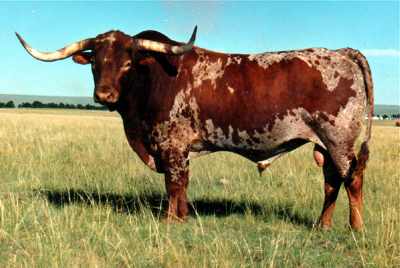 He is sired by Cowcatcher, out of the famous Doherty 698. Some feel Overwhelmer, a many times World's Champion Sire & World's champion Get of Sire himself, is the superior sire in the history of the breed. He sires size demanded by the commercial and show industry. He combines both opposite segments of the industry in one bull and also consistently sires dark red and spotted animals. His most famous son is Senator. Numerous other sons of high regard are scattered around the nation. Semen is limited because very little semen was in inventory at the time of his death. 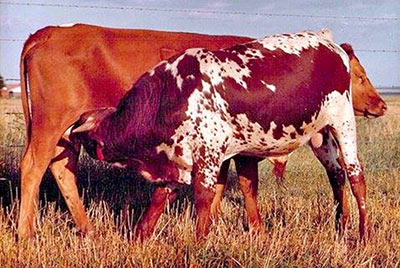 Overwhelmer - Pictured with his recip mother at weaning. He was a son of Cowcatcher out of Doherty 698, born 11-18-1982. He was 1/4 Wright blood, 3/8 Wichita Refuge, and 3/8 Phillips. This was a blend of the 3 popular families when cutting edge conformation and commercial gainability was very valuable.

Our family never owned Cowcatcher, but he was highly appreciated and a large amount of semen was used with wonderful profit during the eighties. Cowcatcher was over a ton which was highly respected in the eighties. Doherty 698 was owned by Frank Doherty during all of her production of famous cattle. She was dam of 44 embryo transfer calves sired by 11 different bulls with Overwhelmer and Phenomenon being the most well known.

I was never able to buy Doherty 698 or Cowcatcher, but we leased Doherty 698 from Frank Doherty. We did all the embryo work, furnished all the recips and Frank got 2 free pregnancies and we kept one for the effort. DCCI got 15 embryo recips in the lease, Frank got the rest. I wanted the Doherty cow so bad Frank hammered me to do embryos on the halves on a cow named Abilene and 4 other cows who were not worthy of my expense. Frank was a hard dealer and a good cow man, and a great business man.

In the early eighties our DCCI embryo lab hosted 86 donor cows and maintained a herd of over 1000 recips at all times. Frozen eggs were not perfected at that time. During one 24 hour period 105 hot embryos were transferred. Linda pulled all the embryos. Dr. Charles Vincent transferred all the eggs and our people worked over a 30 hour day.

Frank would come over and get a trailer load of pregnant recips every couple months. He liked the big recips and left me with the little ones. Once I sold several TL bulls to the 4 D Ranch at Peyton, Colorado; the old Cecil Dobbin Appaloosa ranch. The 4 D bred Red Angus heifers to our TL bulls for calving ease and raised some wonderful commercial females. I bought 120 of these mostly red poled heifers and started placing embryos in them at about 12 to 14 months. Frank did not want any of these recips that were small so I kept them. When Overwhelmer was born his host weighed 700 lbs. At weaning time he was almost as big as his host dam. When he nursed he would hunch and lift her off the ground. He was one of the largest weaning weights of that day -- it was genetics, not the recip or the environment.

Overwhelmer, I considered one of the 2 top bulls of the breed and gave him over 100 cows to bred each year with a 5 month season for 6 years. I sold half interest to Mike and Laney Weise, Voca, Texas, later our half to Frank Rust, then of Houston, Texas. Frank did short term leases during his short ownership. Charlene Semkin leased Overwhelmer, took him to Arizona, and bred him to over 80 cows in 60 days. Bob Coffee of Travis Peak Ranch also had him for a while.

The Weise family raised great dark red spotted Overwhelmer show stock and their kids won everything at the World Show. Overwhelmer was twice Champion Get of Sire. Charlene Semkin raised Super Man the sire of Super Bowl. Dozens of breed greats were progeny of Overwhelmer. He has 629 registered progeny.

When Frank Rust bought half of Overwhelmer I insisted on a full mortality insurance policy. I bought a $20,000 policy payable to Frank for one year.

Overwhelmer took the massive number of cows with ease, but slowly got very poor. Frank took him to Texas A & M College of Vet Medicine, he was x-rayed and found to have a large ball of hardware twice the size of a soft ball in his lower stomach. A & M did surgery to remove the metal and Overwhelmer died. The insurance policy ended just days before his death and was not renewed.