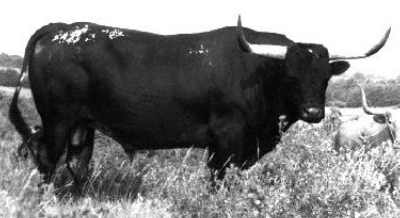 Reg.: T-0286
Brand: 113
DOB:
Color:
He is an all WR bull & by every calculation is rated as the most popular WR bull of all times. He was completely black with a few white specks on his hips. His siring ability has excelled beyond every WR sire of record. He has sired more sons with over 50" horn than any other WR bull. His most famous son is Don Quintana or Don Abraham. Only a dozen or so units of semen remain available. Over 95% of all great pure black or black and white registered Longhorns trace to Don Quixote in their pedigree. He often is the only traceable source of original black in the entire pedigree. 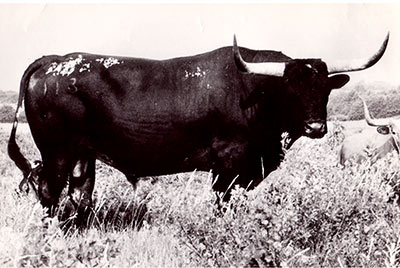 DON QUIXOTE, the Mystery, the History

By Darol Dickinson - Reprinted From "The Trails" July 2012

Homozygous is a scientific "high-sounding" word used in educated circles. It means "an organism with identical pairs of genes with respect to any given pair of hereditary characteristics, and therefore breeding true for that characteristic." In simple backwoods vernacular, homozygous means, "If your momma is really ugly and your pa is really ugly, you are sure-enough going to be ugly."

In the Texas Longhorn breed no homozygous trait has ever been documented. The horn, the browse utilization, the spot pattern colors, longevity and calving ease, although wonderful traits, all can be diluted when mated with breeds who are not carriers of these qualities. Words like "never," "always" and "absolute," when talking of Texas Longhorn matings, can make one appear foolish in the "nearly homozygous" realm. This article will deal with the facts of history and consistent genetic results. This is a breed with a wide range of traits, all very different from other breeds, honed by the fine-tuning of many centuries.

The closest trait to homozygous in the Texas Longhorn breed is the black genetic of the old foundation Wichita Refuge bred bull Don Quixote Spear E #113. Over the years, as often happens, his name was shortened to Don Quixote.

Thousands of foundation cattle have edged into unknown generations, yet a certain few remain, and now are proven to be breed-changers. The Wichita Refuge (WR) has raised nearly 12,000 Texas Longhorns. The WR family of genetics can be found in well over a hundred thousand more, but only one WR line has held strong, dominating among all other families. For a variety of reasons certain cattle changed the forces of pedigrees, and took control of the generations. Such was Don Quixote. Many believe every top, black Texas Longhorn traces an unbroken line back to Don Quixote. Some may argue about who are the "top" black cattle and some confuse black with real dark brown. Still, most believe all great black cattle trace directly to Don Quixote at least one or more times.

Many cattle are called black, but really are a dark walnut brown. If a critter has rust colored inner ears, a mealy muzzle, or even a slight rusty or dun tone down the back line, this would not be a true black. A true black is black from the nose hairs to the tip of his tail.

True black Texas Longhorns "nearly always" have one or more true black parents. "Nearly never" has a true black been recorded without a black parent, unless one parent is a silver grulla. In this case a black can sire a grulla, the offspring be grulla, then another black can be born the next generation. This doesn't happen often. There is a close relationship between grulla and black.

To illustrate the strength of Don Quixote's near homozygous black factor is the bull J L McBrides Pride, a true black. The black lineage traces through his dam to her sire, Deigo's Hot Shot, sired by Blackwood's Deigo, by Crown C Don Deigo, by Don Quintana by old Don Quixote -- a seven generation black line starting with Don Quixote. Amazing as the strength of the Don Quixote black is, many of the bulls sire 70% black or black speckled progeny.

The first black-base colored cow to pass the 70" mark was Sarasam by Quill, tracing an unbroken four-generation line back to Don Quixote.

The beautiful Night Safari BL833 traces a black line to her sire, BL Night Chex, out of Miss Quixote Special, out of Quixote Joan by Don Quixote.

The widest-horned black bull is Over Kill. His black unbroken line through his sire goes to Overhead, by Headliner, by Archer 92 who is out of Archer 381 by Don Quixote. He is six generations to Don Quixote with no other black animals in his pedigree. Over 70% of his calves are black-based color. That is not yet homozygous, but getting very close.

Going back to the aging records of Wichita Refuge, Wildlife Biologist Jeremy Dixon located data that showed on September 21, 1961, a calf branded WR 1882 and a heifer calf WR 1878 were purchased by Ted Lewis, of Maud, Oklahoma. The bull cost him $115 and the heifer $130. The bull is registered as black with white on belly and the heifer was a walnut dark brown color. The sire of WR 1882 was WR 1156, recorded as a black-blue roan.

Going to TLBAA records, WR 1882 and WR 1878 were registered by Oklahoman Archie Beller, then transferred to Elvin Blevin's Spear E Ranch. Blevins registered a black bull calf as Don Quixote Spear E #113, named due to his Mexican looking appearance. Blevins consigned him to the famous TLBAA promotional Centennial Trail Drive Sale in Dodge City on July 3, 1966. He was purchased by Ralph Chain of Canton, Oklahoma.

In the early 1970's Texas Longhorn cattle were not a hot item. For many years a $1100 bull led the statistics for high seller. A flat-horned bull raised by Jack Phillips, Texas Ranger JP, was the largest horned bull (48.75" T2T) and also had the largest body in the industry. He was used by Dickinson Cattle Co. during the early seventies. He was the first TLBAA AI Certified bull, and semen sold for a whopping $5.20 per ampule.

As his calves began to attract commercial interest and some were selling well, Dickinson was looking for the next cross on Texas Ranger daughters. With the Ranger family's record horn and size, his calves were often a pale dun, some had extra leather under their neck, and in general had a coarse, sloppy conformation, often with large sombrero spot patterns. While visiting Oklahoma Longhorn producer Kenneth Archer, a bull used by Chain Ranch was discussed.

Archer and Dickinson went to Canton to see Don Quixote. The bull was exactly what Dickinson felt would work on Texas Ranger daughters. He was very straight backed, had a very trim underline, a small symmetrical head with ears so small a baby's hands could cover them. Don Quixote was black as four foot up a stove pipe, with tiny white specks on his hind quarters. He was strong in every area that Texas Ranger was weak.

World history documents that four-fifths of all cattle were bred for use as pulling oxen. In the J. Frank Dobie book, The Longhorns, Dobie carefully recorded that all original cattle arriving to North American shores were trained pulling oxen. The blend of these early cattle, mostly from Spain, included various types, colors and breeds of Spanish bovine. In this case, Texas Ranger more closely resembled the oxen type, and to the opposite, Don Quixote the Mexican range cattle.

On July 11, 1972 Don Quixote was purchased from Chain Ranch by Dickinson Cattle Co. LLC, then headquartered in Colorado. Immediately it was planned to collect his semen, however, the collection company was scared of Don Quixote and refused to collect him. Terms were finally agreed that they would collect him only if he was halter trained and could be handled safely with a halter. Dickinson proceeded to halter break a seven-year-old bull, which was not an easy job. When the day came that Don Quixote was taken to the AI center, he made one collection jump and donated over 800 ampules. That was his only collection for nearly 10 years. Most of his famous progeny came from semen (price $5.20) of that collection. He was TLBAA AI Certified as AI bull #2.

Don Quixote was bred by Dickinson Cattle Co. for several years mostly to Texas Ranger daughters. He was purchased by Texas oil man Cy Rickel Jr., then Wright Ranch at Robstown, Texas, and completed his service life at the Safari B Ranch of Vici, Oklahoma.

During the life of Don Quixote there were only a few hundred Texas Longhorn producers and very few of those used AI. From small herds a handful of calves were produced, B Bar D Texas Don, Don Quintana, Choya, Quixote Cheetah, Don Quinado, Don Abraham, Quixote Joan, Tiptoe, Oklahoma Quixote, and Quixote Caledonia were the better known ones.

From the Don Quixote foundation many of the most valuable cattle today trace back to him. Some are black, many are dark colored, and to throw the main point off track there is the first clone cow, Starlight, mostly all white, one of the best, sired by the black bull Deigo's Hot Shot.

At Texas Longhorn shows as many as a third of the entries are black or black spotted. With few, if any exceptions, they all trace back to Don Quixote. Some are as far back as 12 generations, and still black.

Only a few people are living who actually saw Don Quixote in person. Through his down-line progeny his dominant mark of black, dark colors, small specks, and correct trim-type forever lives on. The early colors of registered Texas Longhorns were mostly dun or a pale red -- dominant pale red. Had Don Quixote not contributed his bold black slick-coated DNA, it is without a doubt, there would be very few, if any true black Longhorns today. Without the DON, it would have been a very pale, dishwater colored Longhorn world.