Surviving Black Vultures and Their Friends in the Government.

"Our registered cow, Rebels Dawn was starting to calve this morning when we put cubes out. Then when we put hay out later, we found her frantically fighting off four big black vultures. They must have attacked the minute it was born and still alive. Ears, eyes, nose gone, and limbs torn apart as the vultures ate, and fought over it."  Linda Ragains, Sallisaw, Oklahoma, Facebook March 1, 2022. 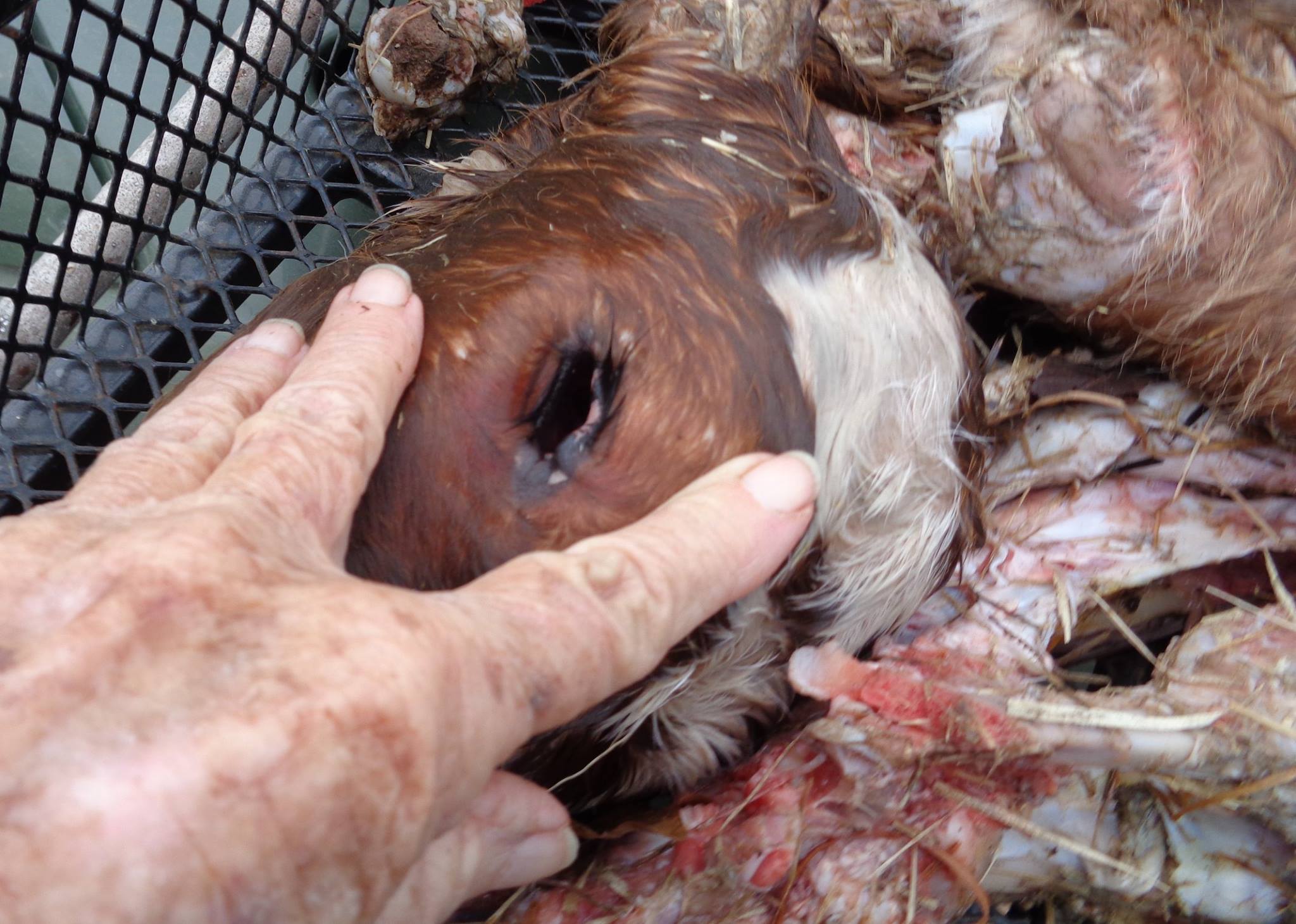 Black Vultures are cunning, ruthless predators. They will locate a cow that is calving and peck the calf's eyes out before it is completely born. As the cow is working to give birth, the Vultures take advantage of her inability to fight them. Not only do the Vultures know their skills, the USDA gives them diplomatic immunity to do their dastardly trade with a $5000 fine to anyone who kills one. Black Vultures unknowingly savor the full protection of the USDA. 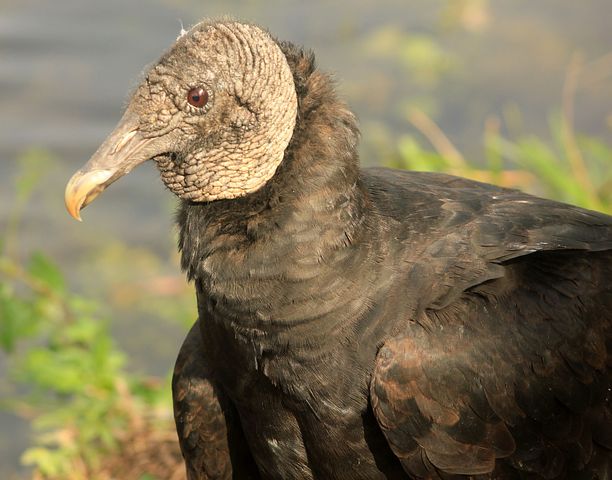 Leaving Oklahoma, going to Gambier, Ohio, a major pork producer found parts of pigs killed and consumed in his farrowing barn. In a hidden barn location he was able, over a period of time, to shoot 20 Black Vultures. They were flying in a large door, pecking the pigs' eyes out, and quickly either eating them or flying away with chunks of fresh ham. Although the farmer knew a $5000 fine by the USDA per Vulture was a devastating cost, the continued loss of a barn full of pigs was a larger loss. 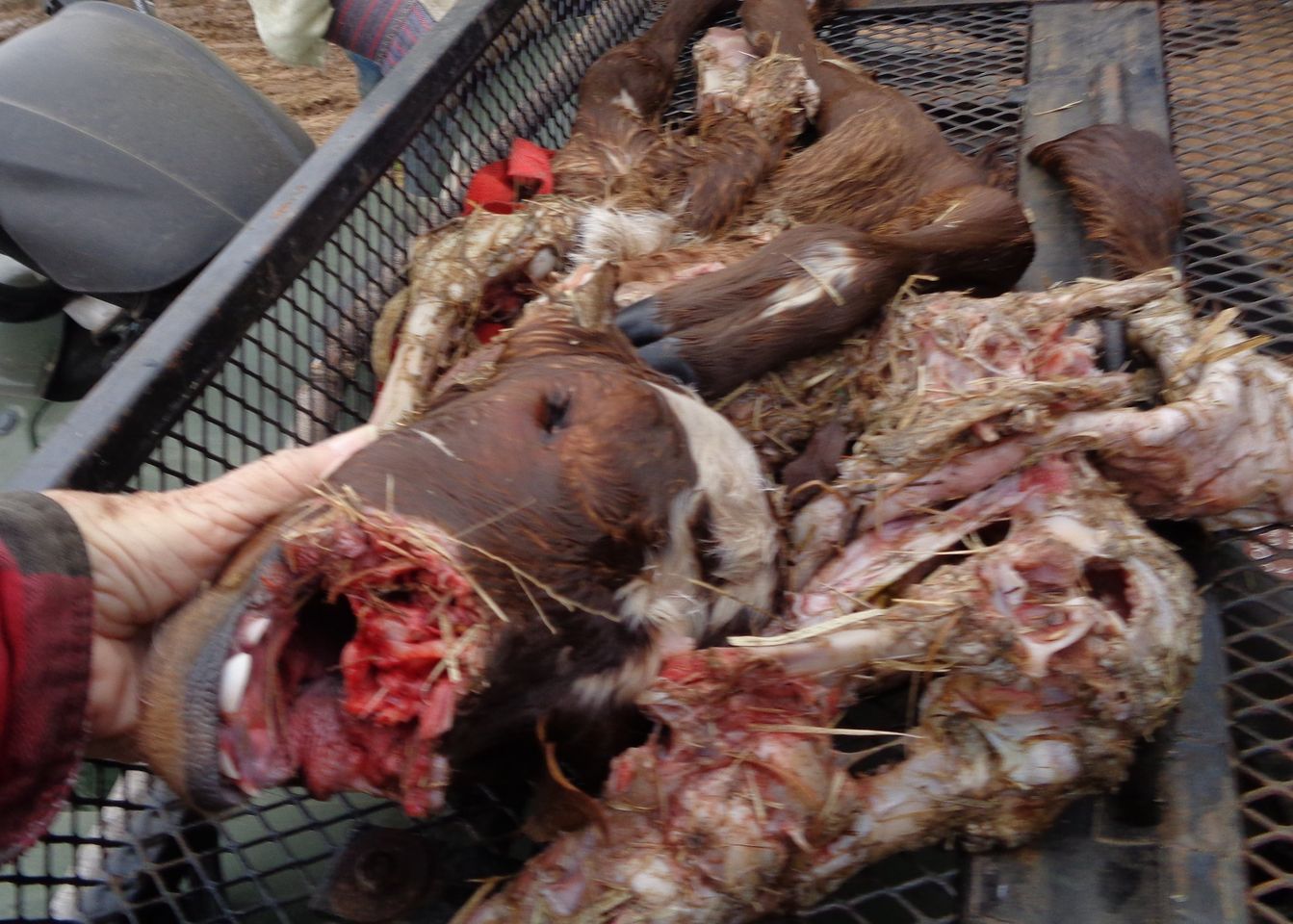 Parts remaining of Linda Ragains' calf after a few minutes with Black Vultures.

Surviving USDA and state government predator protection regulations is getting heinous to all types of livestock producers. The Federales out West are releasing wolf packs on the ranchers. The wolves have killed every elk and deer fawn where released. Now they have developed a taste for calves -- lots of calves.

Colorado has serious protection for wolves and rattlesnakes. Don't kill a rattler without a special permit.

Move to our experience here in Ohio. Our government has a "reintroduction" program to take the country backward to a hundred years ago with many costly predators in full reproduction mode. Ohio is releasing river otters that clean out the stocked fish in private lakes. Ohio has released bobcats, mountain lions, and they protect Black Vultures.

After Ohio bobcats have cleaned out the wild turkey population, now the government has a program to create wild turkey habitat. Unless the turkeys have habitat without  bobcats, no habitat will help. Any tree a turkey can roost in, a bobcat can climb. Are they crazy?

Our government is apparently managed by staff who have no private livestock investments. They are totally void of normal animal compassion. Their thinking process coming out of government offices is less than imbecilic. Maybe back in their ancestry is werewolf genetics?

The article below was released by the Ohio Farm Bureau Federation. Just think -- Linda Ragains, getting an appointment to become an "approved applicant" to "dispatch" five vultures. May take a month or so to process the application. How many calves would be lost by then? Congratulations to OFB for trying, but this branch of government isn't going to do any livestock producer even a tiny favor, no way, no how. D

COLUMBUS, Ohio — The U.S. Department of Agriculture announced this week that approved applicants – who will be determined after consultation with USDA’s Wildlife Services – will be allowed to remove up to five black vultures in Ohio. Applicants must agree to follow all rules and regulations required by the U.S. Fish and Wildlife Service in the Ohio Department of Natural Resources statewide permit.

The black vulture population has increased in Ohio in recent years. These birds – which have a dark gray head and are very aggressive – should not be confused with the larger, less aggressive red-headed, turkey vulture.

“Black vultures are an extremely aggressive predator,” said Roger High, director of livestock with Ohio Farm Bureau and executive director of the Ohio Sheep Improvement Association. “They come into livestock farms of all types and attack the newborn animals and are very destructive.”

As migratory birds, black vultures are federally protected by the Migratory Bird Treaty Act, state laws and regulations, which means they can’t legally be killed or destroyed without a USFWS Migratory Bird Depredation permit.

As a way to streamline the permitting process, the Ohio Department of Natural Resources has obtained a statewide depredation permit for black vultures from the USFWS. ODNR will work with USDA Wildlife Services to issue sub-permits to livestock producers who are experiencing issues with black vultures. These sub-permits cover commercial livestock, including cattle, horses, sheep, goats and swine, and are free to livestock producers.