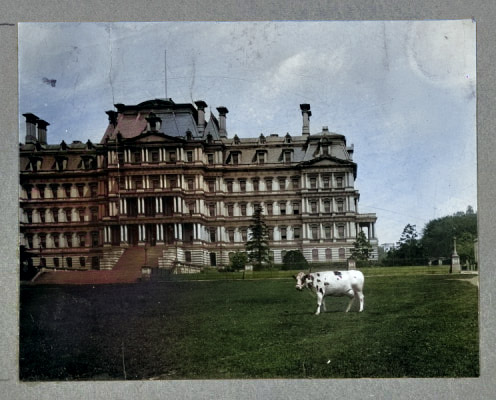 The White House has been home to menagerie of pets throughout the history of the United States. Many presidents were dog lovers with a few cats here and there. Others were quite fond of horses. Some of the more exotic pets include two bear cubs kept by Thomas Jefferson, an alligator that lived in a White House bathroom during John Quincy Adams’ administration, Andrew Jackson’s parrot which famously knew how to swear, and a pair of racoons named Rebecca and Rueben that lived with Calvin Coolidge and his wife. One of the pets in this certifiable zoo is Pauline Wayne, the last cow kept at the White House.

Pauline Wayne came from a farm in Kenosha, Wisconsin, that was owned by Wisconsin senator Isaac Stephenson. Pauline was a black-and-white, 1,500-pound Holstein-Friesian that was selected to make milk and butter for President William Howard Taft and his family. Pauline was chosen from many of the purebred cows on Senator Stephenson’s farm, and she arrived in Washington, D.C. via railroad in 1910.1 The Taft’s previous cow, named Mooly Wooly, had recently died and a replacement was needed. Up to this time cows at the White House were a common site as Washington, D.C. did not have milk delivery services.

Pauline’s arrival was a big event covered by several national newspapers. There was added excitement to her arrival because she was pregnant, and soon after arriving in Washington Pauline gave birth to a bull calf. The calf was named Big Bill in honor of the 300-plus pound president who was known then, and most remembered today, for his large size. Pauline produced about eight gallons of milk a day for the Tafts, and she became like a pet to them living in a stable that housed Taft’s carriage horses and “iron horse” (Taft was the first president to own and use a car while in office).2

Pauline soon made headlines for an interesting adventure she went on. In 1911 the first ever International Dairy Show occurred in Milwaukee, Wisconsin, and organizers asked President Taft if they could feature Pauline at the event. Taft agreed, and she went towards Milwaukee in a private train car. However, along the way Pauline went missing! The White House and Dairy Show searched frantically for her. A private detective agency was even hired to find out where she was. Eventually after two days she was found and identified as being President Taft’s cow.3 Newspapers reported that a railroad crew had mistakenly switched her car sending her with other cattle cars to the Chicago Stockyards. The New York Times reported, perhaps hyperbolically, that Pauline was found just in time and saved “from the bludgeon of the slaughterer.”4

Pauline finally made it to the event where she was again a hit. Judges fawned over her. Small bottles of her milk were sold as souvenirs for 50 cents a piece at the event so dairymen and other attendees could taste the same milk the president drank every day.5 Her return trip to Washington went according to plan, and Taft did not let her attend future shows after the fiasco that had occurred in getting her there.

Pauline assumed her normal milking and grazing routine back at the White House yet for the remainder of Taft’s presidency she remained a point of fascination with the media and visitors. The Washington Post wrote many stories on Pauline, a few of which included a series of “interviews” with her in which reporters would ask her about recent events, Taft’s policy, or her daily life.6 Another story of note regarding Pauline happened in 1912 when an agriculture teacher from Ohio who was visiting the nation’s capitol reportedly jumped the White House fence and milked Pauline. She was grazing on the South Lawn and after seeing no security the gentleman thought he would get a taste of her milk for himself. The milk was as good as he had heard, according to the man.7

The celebrity of being the president’s cow took its toll on Pauline and her health declined during her time at the White House. In the election of 1912 President Taft was voted out of office. So, when he left the White House, Pauline did as well returning to her home on Senator Stephenson’s farm in Wisconsin. Her health did improve upon her return to the farm and she lived the remainder of her days there.8

Chandler Hansen grew up and lives in Easton, NY. He is a graduate of Gordon College where he earned a bachelorâ€™s degree in History. He serves as a writer and editor for Morning Ag Clips.