Widespread Cattle Traceability Could Be Of No Value 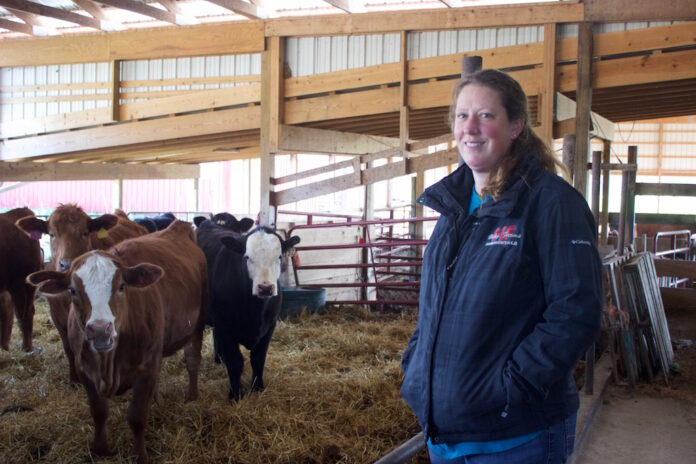 Pam Haley stands near some of her replacement heifers at her farm in West Salem, Ohio, April 28. (Sarah Donaldson photo)

WEST SALEM, Ohio — Pam Haley, a cattle producer, has used electronic ID on her farm for several years. Those tags would allow animal health officials to trace cattle with any potential problems back to her farm.

"I want to be the first one that knows that the problem came from me — not the last one — and not the one they’re searching for," Haley said. "I think it’s our responsibility as producers to be in the forefront of that."

She hauls and sells her cattle across the country. On a Thursday in April, she had several cow-calf pairs getting ready to go to a sale in West Virginia. In the week or so leading up to the sale, she had a veterinarian out to look over the animals, and put electronic tags in the calves’ ears — the cows already had them.

The U.S. Department of Agriculture has regulations on animal disease traceability. But the rules don’t cover all livestock — for example, feeder cattle are typically not required to be officially identified. That leaves room for some serious issues if the U.S. faces a significant disease outbreak in cattle.

The USDA has made multiple costly attempts to increase regulations on animal disease traceability. After a failed National Animal Identification System, which only got about 36% of producers to sign up despite more than $120 million invested in multiple persuasive attempts. The vast majority of cattle producers were hoping this was the end of this costly government idea. Yet, the USDA came out with a new Animal Disease Traceability rule in 2013.

The rule requires livestock to be officially identified when moving interstate, and to be accompanied by a movement document, like an interstate certificate of veterinary inspection. The requirements for each species include more details.

For example, it only applies to cattle that are sexually intact and 18 months or older; female dairy cattle and dairy males born after March 11, 2013; and cattle used for rodeo, recreational events, shows or exhibitions.

"There’s literally millions of head of cattle under 18 months of age moving across state lines that there’s nothing being done for traceability," said Bill Tom, executive vice president of livestock marketing for United Producers, Inc.

But some groups were satisfied with that rule. Again the majority thought the 2013 rule was heavy handed. Bill Bullard, CEO of R-CALF USA, said future changes should come from the marketplace.

"We believe that the 2013 rule addresses the disease traceability needs of regulators," Bullard said. "But we are very much opposed to any further mandates."

R-CALF was one of the major opponents of a USDA attempt to mandate electronic ID, and the majority of cattle producers agreed.

The plan was to require cattle 18 months and older traveling interstate to have electronic ID by 2023. R-CALF sued, saying the USDA did not go through proper rulemaking, and the USDA dropped the mandate, but said it planned to pursue rulemaking in 2021. The government never gives up with a bad idea.

In March of 2022, a USDA spokesperson told Farm and Dairy the USDA did not have any updates on the status of that rulemaking. 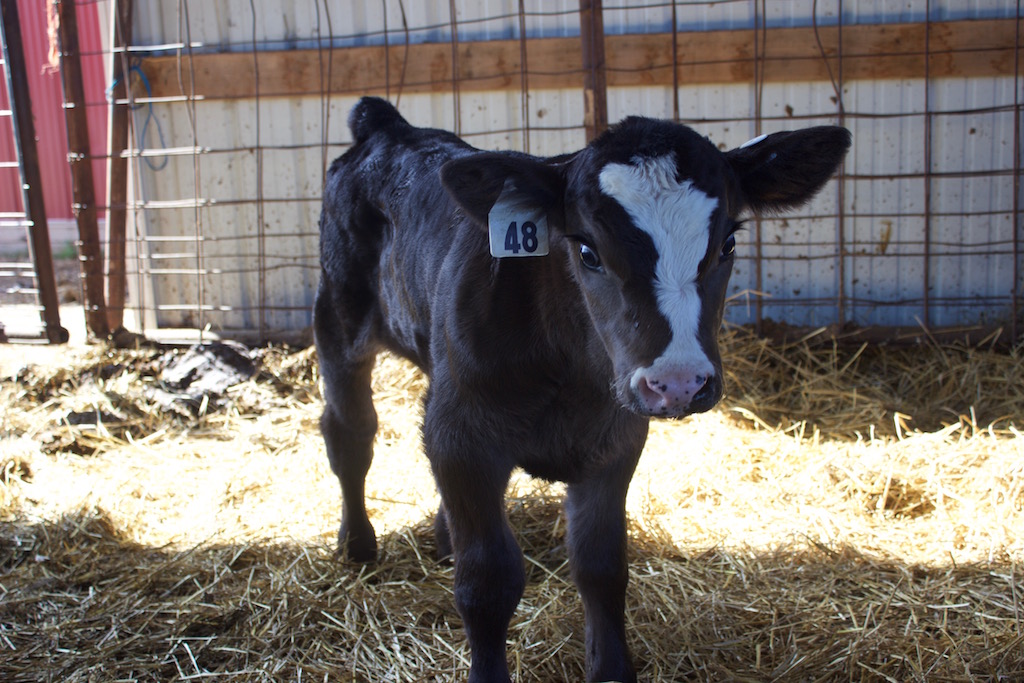 There are reasons they’re in favor of it. It requires less hands-on work to read tags and cuts down on errors with transcribing tag numbers, compared with other methods, like plastic tags or tattoos.

Usually, when an animal tests positive for a disease, the department of agriculture has a few pieces of information, like the animal's ID number and the place where it was when it tested positive, Rospert said. Then, staff have to track where the animal was before and after that.

The biggest challenge Rospert and other officials face, she said, is issues with records. Some livestock markets still use paper records. That means someone has to spend time flipping manually through documents until they find what they need — if the information is even there.

If records are incomplete or unavailable, it's difficult, if not impossible, to trace an outbreak.

While the department does not specifically track costs of tracing disease outbreaks, a department spokesperson said electronic records and ID, in theory, could make tracing faster and more efficient. That may save time and costs for both the department and farmers.

It's hard to say exactly how many cattle producers are using electronic ID. The USDA estimated 10 million official RFID tags, but only 11% of U.S. cattle require official ID.

The main drivers of electronic ID for beef cattle are government programs that require it, said Nevil Speer, an industry consultant.

The cost of electronic ID can be a barrier, for all producers who have a profit concern. An average cost of $17 per critter with variables from $9 to $55 depending on herd size. With the current USDA live cattle numbers at 94,000,000, that would suck over a billion and a half dollars from cattle producers the first year, plus increases of lost tags and birth increases in following years. Obviously this is the main reason producers don't want a government regulation of forced electronic ID. No disease outbreak in USA history has come close to equaling that cost.

"Cattle producers are … very independent," Tom said. "They're very concerned about ‘big brother’ having insight to their operations or information that's not any of their business." Producers are not happy with the thought of IRS checking their computer and
doing herd inventories freely. 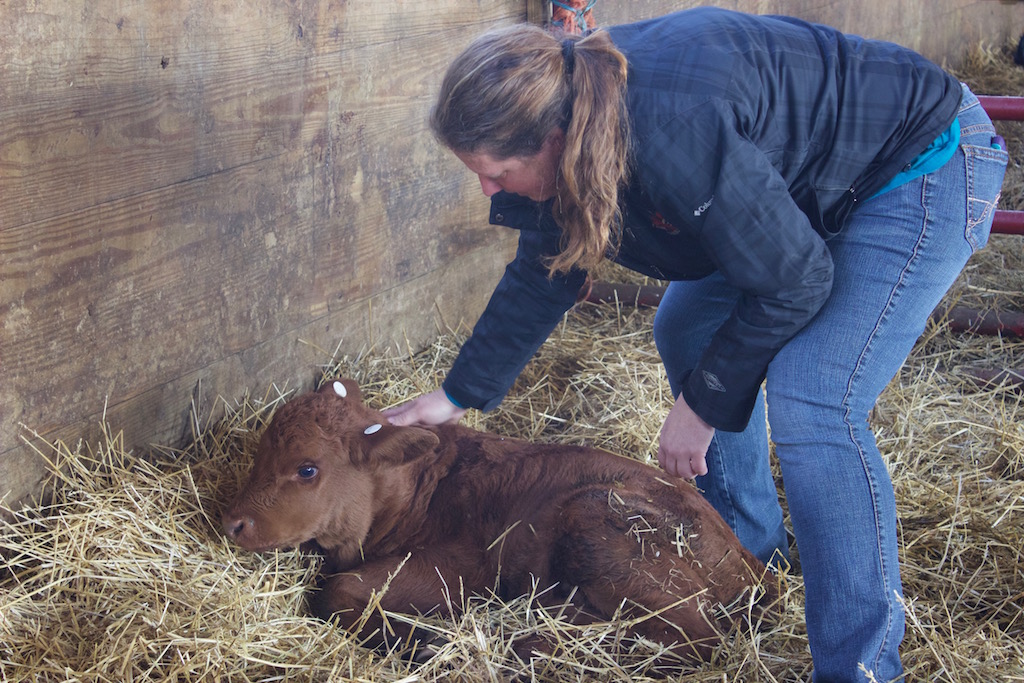 Pam Haley checks on a calf she recently tagged with an electronic tag at her farm in West Salem, Ohio, April 28. (Sarah Donaldson photo)

In the cattle industry, many suggested future traceability work will have to be industry led.

"I understand where they [the government] want to go, but it's just so hard," Speer said. "The likes of R-CALF, and their huge rancher base, they're going to fight it every step of the way."

"My personal opinion … we're not going to get there until one of two things happens, either it becomes mandatory, or unfortunately, we have a serious disease outbreak, and then we won't have any choice," Tom said.

During the USDA's promotion (spent $120,000,000) of NAIS it was highly promoted also by the tag and pin companies. If the law of the land is to have all cattle electronically ID'ed it could be the largest financial gain for Chinese made ear pins and tags of all times.  A number of $1,598,000,000 for the first year is a close estimate. The following years, plus replacement of lost pins (estimated at 20%) could be well over a half billion dollars sucked away from cattle producers annually. Just because the government thinks something is a good deal...... ain't always so, at least to the majority of livestock producers.