This article is about GIVING AWAY ICE CREAM, and how it can happen -- what are the warning signals? Giving away ice cream is a depressing phase of business. I will condense the years, and try to make this sad history short.

In 1979 the huge continental cattle breeds had been imported from Europe -- their calving problems were plaguing the USA ranch industry. To help fix this problem over 1000 Texas Longhorn bulls were sold per year by Dickinson Cattle Co, to provide calving ease and save the lives of precious first calf heifers, then the gravy train slowly ended. In the early eighties sales dropped like a fat man at a motel pool. An imported French breed called Salers was capturing the easy-calving-bull business and produced a larger finished steer with not a lot of calving problems.

This just wasn't by accident. Some very progressive cattlemen went to France and bought the very best of the Salers breed. Roy Moore of Idaho and Phil Tetrault of Calgary trudged the mountains and caves of France hunting the very best of the best Salers. At great cost to these foresighted importers, Salers were brought to Canada and then to the USA and other countries.

Every livestock breed that excels has one or more brilliant promoters. The Salers breed had many. If a breed doesn't have any great promotion leaders, regardless of the breed's merit, they always wilt away, die, or slowly ride into the sunset.

The French knew it was a competitive world market. They knew Italian, German and other French breeds had already hit the USA market. The French cattlemen worked to send their very superior performing, easy calving genetics to the USA. Fortunes were invested selecting and importing the best. This was going to be very good for a lot of people.

Roy Moore entered Salers steers in the largest carcass contest in the nation,Â  the Denver National Western, and hands-down won the carcass contest year after year. Salers had huge rib-eyes, excellent marbling and thin back fat. They were almost unbeatable for carcass quality. Salers values were without question.

At one time Roy Moore owned the famous Salers sire "Jet" and took him on tour to every major cattle event in North America. He was selling semen so fast he developed a mobile semen collection program in order to never miss a collection day while Jet was traveling. Some Salers sires were selling even superior to Jet. There were professional promoters who were getting the Salers story told. The breed was multiplying rapidly. All the right marketing and exposure things were being done -- the right bases were being touched.

L. F. McCullum, CEO of Conoco owned Scattered Oaks Ranch near Houston. He was one of the first Salers importers. McCullum learned world famous cattle-scientist Professor Jan Bonsma of Pretoria, South Africa wasÂ  a fan of Salers. Bonsma believed Salers would add quality to most breeds of world cattle. McCullum flew the elderly professor to Houston and staged a major cattle educational program extolling the many Salers virtues. Attendance was international. Then they had a Salers production sale which went very well.

Early on, when it was obvious that Salers were meeting the demands for high value cattle Dickinson Cattle Co went into the Salers business. It was easy to figure out. Here is what I did:

1) The most sought after Salers were the original imported cows. I went to Canada, McCullums, and leading USA ranches,Â  and bought 9 imported cows for flushing.
2) I asked 10 of the leading Salers breeders what were the top 5 bulls, and with a few exceptions most agreed on the 5. I bought semen on those 5 bulls, flushed the cows and kazamm! We quickly had one of the top Salers herds in the USA. We were selling young bulls for $4500 to $8000 each. Every male was herd sire saleable.

Salers seminars were being held from Edmonton, Alberta to Houston to Idaho. Data on investing and breeding these French cattle was compelling. The brilliance of locating this breed, import costs and early promotion was costly. The educational and exhibition plans were excellent. Possibly one of the greatest business ideas of any cattle breed. A lot of smart people found the plan and made it happen. Salers classes were added to very major cattle show. Salers auctions were happening all over, every weekend. With embryo transfer the breed was doubling numbers annually.

As my beautiful plan was happening it was just too easy. We were raising some really great cattle, but so was everyone else. 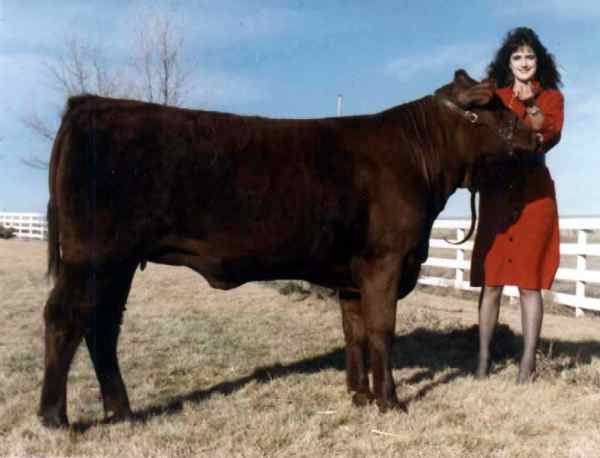 Figure 4 Sally was sired by a Salers bull we partly owned, Royal Blue. She was All Age Grand Champion Female at the National Western Stock Show. Photo at DCC with Marika Walters.

Salers were a producer breed, not a trading breed. Most income was generated from sales of commercial-use bulls enabling producers to keep their top females for continued breed improvement and herd asset value.

Due to the brilliant educational/promotional skills perfected by the founders, lesser skilled sale managers begin to flood the market with frequent sales. They harvested a business already developed by some great cattlemen before them -- sale after sale after sale.

At the annual Salers Convention the young president dropped a bomb on the members. A serious DNA effort had been funded and a rare genetic defect was detected called beta-mannosidosis. At that second, members cringed and investor confidence was down the tube. The DNA found the genetic factor. Although, over time, it became almost insignificant, but on that day, it hammered the breed due to the unknown results. The national convention was the wrong place to drop that bomb. Two of the 5 great bulls were said to be carriers, but DCC and other major herds never saw a positive.

A wealthy business man started to build a Salers herd just 8 miles from DCC. As their numbers jumped, they hauled, and showed cattle continuously. They worked at showing, but neglected their marketing. They bought shares in the very top Salers semen sires. Their cattle were excellent. When they were overflowed with cattle they started to have regular auctions on the ranch. Their sales were not well promoted and bulls like we had been selling for $6000 sold at their auction for $1500 to $2000.

Soon the owner/investors lost interest. Unknown how, a local rancher/banker acquired the whole herd and several of the famous sires. He ranches 6 miles from DCC.

At this point a quarter of the cattle in the local Calhan, Colorado livestock auction were Salers or percentages. They were down to selling by the pound. Salers great virtues were so accessible their value as premier, elite, world class cattle was now just another red cow in the pasture.

The banker acquired the herd of 400 cows. In the fall he would wean the bulls and place them in a feed pen for sale. He had genetics as great as France. There were 150 red bulls all huge, thick, fairly easy calving and --- choice for $1000. Being a banker, you could pay a third down, a third in the fall, an interest fee, and the balance in a year.

And, that is how you give away ice cream.