Juma
In 1494, history records that Columbus offloaded 17 boatloads of voice-command-trained oxen of Spanish origin, all black in color, on North American soil. In a few hundred years the dominant color became a pale red. An early name for feral cattle in Mexico and Texas was "Sonora Reds." Photos of south Texas cattle consigned to the San Antonio stock yards showed thousands of cattle, mostly red or pale red-brindle in color, at the turn of the last century. In these photos seldom were black-speckled, or dark red-speckled cattle seen. Contrasty, flashy or bright colors were not a natural result in the wild multiple-sire mated herds.

Prior to 1940 the Milby Butler herd was reported to be dominant earth tones -- browns, pale reds, duns and smoke colors. Mr. Butler purchased a special unrelated cow who impressed him with her large horns. She was white with red ears and a few small specks of a light roan hair coat. As she was used in the herd and bred to different Butler bulls, five herd sires were the result, and all were white like their mother. The white color was a brighter change from the camouflage foundation colors. As the Butler genetics move forward, the foundation of solid reds and white colors remain strong today. Even when a speckled Butler-bred animal is bred to another colorful one, the result often evolves back to the all red or white solid dominant colors. 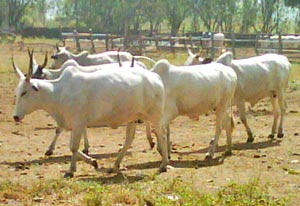 In world history four-fifths of all cattle were used as oxen, for pulling, plowing and as general beast of burden. Stamina, intelligence, strong legs, large horns (to retain yokes) and athletic abilities were of the utmost importance. Only in the last 100 years were cattle performance tested for human consumption, rate of gain and beef-eating qualities.

More data reveals that four-fifths of the world, where cattle are raised, is tropical or subtropical. As a result heat has played a role in color patterns and genetic changes. Black hair coats absorb more heat and create an increased stress factor causing reduced physical performance. Valuable cattle for thousands of years were cattle that could pull a covered wagon, plow or drag logs for more hours, and more miles. In hot nations black colored cattle are not efficient. As a result of the evolution of world cattle adapting to their environment, a color pattern developed to handle heat. It is a dark skin pigment and light hair colors to reflect heat. Climates affected the colors. Personal preference and selection by the owners affected the changes desired.

White hair coats reflect heat, but under tropical ultraviolet penetration, cancer finds it's way to non-pigmented sensitive areas. As dominant cattle reproduced a color pattern found on nearly all Texas Longhorns, that pattern is also found from the White Park cattle of England to the N'Dama cattle of Africa. This survival color pattern may be on a predominantly white critter, but pigmentation will be located to protect the ears, nose, eye area, lower leg hair, udder and teats, plus the sensitive areas under the tail. These parts of a critter are often lacking hair cover for sun protection, except with the ears and ankles. Non-pigmented eye areas have historically been a major weakness in some breeds for pink-eye infection and cancer eye. Non-pigmented udders often become sunburned immediately after calving as a result of ultraviolet reflection from sand or snow. This painful chapping causes owners much unwanted extra labor and grief. Unless management selects for total white faces and white udders, the natural evolution of colors, over time, will correct the problem.

As a result of the ruggedness of dark pigmented skin and its resistance to cancer, for thousands of years Arabian horsemen have appreciated the stamina and endurance of gray horses (often with white hair) when traveling the hot sands of the desert. When life and death is a factor, the color of a good riding horse is historically a very serious factor. So, color counts.

When the historic Texas Longhorn association in 1964 sent out inspectors to carefully approve cattle for registration purity, the highest percentage of cattle were a pale red color, often with little or no white spots. When there was only one annual Texas Longhorn sale at the Wichita Mountain Wildlife Refuge, the high selling cattle were most always black speckled. This was a popular genetic selection choice to breed a flashier offspring, and in turn sell for higher prices. As a result of selection for black speckled bulls, many were used with minimal horn and bred only for their bright colors. This created early opinions that black cattle could not grow long horns. 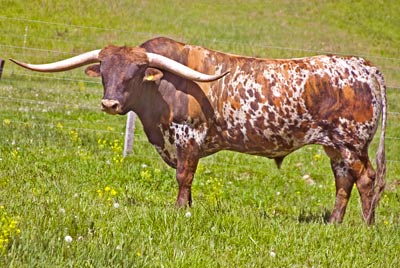 Drag Iron
As a result of the strong use of Butler large-horned genetics, mostly from the white bull Classic, and other related dominant white bulls, eighty percent of the largest horned bulls are 80 percent white. Although white is a prominent color for large-horned Texas Longhorn families, some criticism is aimed at the strong percentage of white colored cattle. Historically the same critique was aimed at dominant red cattle in the early years of breed development. Regardless of color preferences, aficionados of the breed find a love for every color.

One of Each -- a Longhorn Only Fad

While registered Angus with solid black hair coats are ruthlessly criticized if a small white spot is on a newborn calf, Longhorn people could never be satisfied with an Angus herd of all one color. With Texas Longhorn producers, if there are numerous members of the herd of one exact color, a different herd sire will be used to quickly change the hue. New cattle may be purchased to add the total color spectrum representing the historic color shades and tones. Or, a herd with several of the same color may be considered duplicates and offered for sale. In recent years grullo has been a unique value color because many herds have no grullo animals. Often the one unique herd animal with the different color scheme becomes the center of visibility.

When attending sales, chat often turns to what buyers are looking for. Something different from the home pasture is often the target of choice. Although the largest horn spreads have been the factor of the greatest value in recent years, color patterns, face markings, unusual colors, brindles and bold patterns have shown increased value appeal. Without a doubt the animal with a strong striking color has an extra attraction for the winning bidder. People are choosey. Adding value with color should be a business decision. Choices are available and popular colors affect cattle values, even with Angus people.

ITLA has nearly 50 approved judges who exclusively judge all approved ITLA shows. Part of the judging clinics, that each approved judge must attend, deals with judging for values, current day sale values and color values. Color, on the ITLA judging point system may only amount to 2% of the final placing, yet in a close call decision, 2% is the whole world.

This would be a color hard to put into words, but obviously passes the wife face color test.

One person's definition of value color is a color that is hard to describe. Like, "Sort of brownish, with little yellowish specks of a smoky, roanish, maybe brindle, some dark and some ......yeah!" Value colors sometimes are hard to describe.

Tri-color factors, similar to patterns found in the Gunman family, has it's own fan club. The tri-color factor will blend (unlike a brindle) in smooth patterns from a tan or gold color on the pole and upper back down to browns, reds and on downward to dark browns or black legs like a bay horse. The tri-color animals often change with the seasons to embrace a smoky or silver gray tone in the transition. The tri-color can also go from light to very dark, even sometimes mistaken for pure black. Yet a true black has every hair on the body black, including the nose area, the inner ear, under parts and ankles.

Many purchasing selections involve the final OK by the wife. In marketing cattle, if a wife doesn't like an animal, the deal generally won't happen.

The first thing a lady does in the morning is check her face. She works to have beautiful eyes; eyes are the first and most important thing to nearly every woman. If a Texas Longhorn has a lacey face with dark eyes, don't be surprised if the wife points her out and indicates a buying choice. When it comes to faces and wives, color matters.

It would be a perfect world if the bull has a high value color, over 80" horns and all the cows were equally endowed. It would stand to reason that a high percentage of calves would be a lot like the parent animals. That may take some more years of serious breeding, and at this time a lot of money to put those genetics together.

From now until then, here are some mating suggestions to produce value colors: